Why Talk About Caitlyn Jenner when We Have Denrele Edun & Charly Boy? – Etcetera 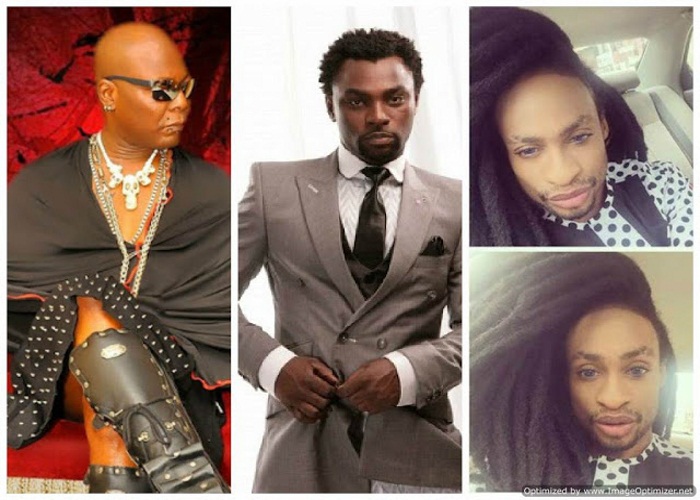 Etcetera dedicated his column this week to Denrele Edun & Charlyboy. And you know how real Etcetera gets when he writes. Read:

And that’s how Bruce Jenner unveiled his new identity, leaving his male identity behind with Caitlyn.” Trust Nigerians not to be left behind in the gossip and buzz it generated. A female presenter with the not-so-Cool FM station in Lagos, known for her fake German-American-Arabian-Indian-Chinese-French-Yoruba accent was like, “Oh my gosh”, so Bruce Jenner is now Caitlyn Jenner? “What the hell is going on?!

Abegii, Nigerians should stop feigning surprise like they’ve not seen or heard anything like this before. You all should stop acting like we don’t have our own Denrele Edun or Charly Boy. Mscheeeeeewww!!! –

Is it because Bruce or Caitlyn (whatever she is called now) finally had enough balls to pluck off her penis? Its just a matter of time, Denrele will be woman enough to pluck off
his too and give us something new to talk about aside from his Nkechi-like hairdo.

I don’t think it should even be in our news that Caitlyn Jenner is now a transgender? There are thousands of them in America. They infused the word in our vocabulary and it has become an umbrella term for people whose gender identity differs from the sex they were assigned by God. An American transgender described Caitlyn as the “Change” that America champions. Which is why America is always ahead of the rest of the world. Hahahahaha! Change indeed.

HELLO!!!! can someone tell that American transgender or transsexual or whatever she is that the slogan for the new government in Nigeria is “CHANGE?” Lol.

We’ve had Denrele since and we didn’t see him as change… Maybe someone should show her Denrele’s pictures so that she’ll will be aware that Nigeria is catching up with them? Jesus Christ! Is this what being westernized is all about? Isn’t this madness? Ok, maybe Denrele is not a full transgender yet. He is still lingering in the purgatory of transvestites. Isn’t that the term for those who enjoy dressing as the opposite sex? Or should we refer to him as a cross-dresser for now until he finally plucks off his balls?

Does it look like Denrele will eventually pluck off his balls? Yes, eventually he will. It is just a matter of time. We are already used to his lipsticks, heels and Nkechi hairdo. And of course he’s already been a poster girl for Nigerian magazines for as long as i can remember. The same poster girl that Bruce “oh sorry” Caitlyn Jenner has dreamt of becoming since he/she was a child. Shit!!! – How do you write an article about Denrele and Bruce/Caitlyn Jenner if you keep identifying them by the wrong gender pronoun?

Am i going to be saying “sorry” whenever i make mistakes like, “He looks hot,” or “she looks hot.”?. The American system has made it impossible to mention Bruce and balls in the same sentence. Like Caitlyn Jenner, are we soon going to start using words like vagina and clitoris for Denrele and Charlie boy too? I pray we never get there. Our society don’t deserve such cruelty and madness. Denrele and Charlie boy for society’s sake, please keep your balls.. Lol…

Lawmakers, we need a little help here. Can you guys please give us something to stop Denrele, uncle Charlie boy or any other Nigerian from de-balling themselves now or anytime in the future? Like the 14 years all expense paid vacation in hotel kirikiri for gays, the lawmakers should do something about transgenders now before Denrele goes from Denrele Edun to Folashade Anuoluwapo Edun or Charlie boy to Chinelo Nkemjika Oputa.

Bruce Jenner is no longer a man proves that America has gone mad. Same as Denrele and uncle Charlie boy proves that we’ve allowed the west to influence us wrongly. These guys have been the butt of jokes and the source of rumor and speculation for years, as their appearances became more feminine.

They need our prayers now more than ever. As for Bruce Jenner, He needs Jesus. Without Jesus, he is hopeless—regardless of whether he struggles with gender identity or not. Eternity is a small and rapidly decreasing number of heartbeats away and he will live in hell, as Bruce Jenner, not Caitlyn, for trillions of years (forever) in horrifying, unending torment, with a never-ending panic attack. The same goes for everyone who is reading this and has been chasing a different identity from that which God has given you. Hell is your future. You will live in terror. This is the truth.