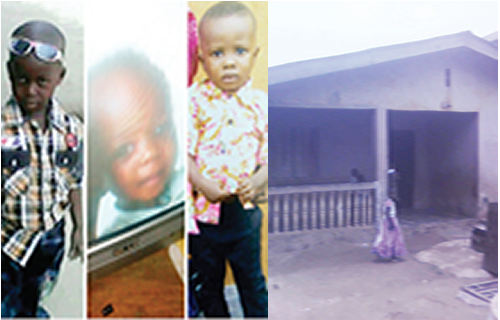 Residents of Mowe in Ofada-Mokolokin Local Council Development Area of Ogun State are still reeling in shock following the abduction of three children by a ‘mysterious’ lady.

The yet-to-be identified woman was said to have abducted the three children, four days after she moved into the community and occupied a rented apartment

The woman took the children – John Segun, 5, Darasimi Ilesanmi, (two months old) and Fikayomi Bankole 3 from their parents in the house where she just hired an apartment and said she was going to a nearby shop in the neighbourhood to buy them confectionaries. But she disappeared with them. Although the children belong to different parents, they, however, live in the same building.

The incident, which occurred on Sunday last week, has thrown the community into shock. The abduction was discovered after one of the parents, tired of waiting and suspected foul play, raised the alarm. One of the parents, Mr. Idowu Bankole, said:

“When I was returning from church that fateful day, I saw the woman with my son. I never suspected her. My wife left church before me, with our two children. I couldn’t go with them; I’m one of the elders in the church and we had a meeting.

“I went to the third street to fix a water tap. I returned about 4p.m. and my wife told me that the woman was yet to return with the children. I encouraged my wife to exercise patient.

“After waiting for about two hours, another victim’s grandmother came out and started searching for her grandchild. We rushed to Mowe Police Station and reported the incident. Our landlord and his son who let out the house to the woman were arrested, but were released three days later. “We’re appealing to the Ogun State Commissioner of Police and Governor Ibikunle Amosun, to rescue our children; we have not been able to sleep since the incident.”

The suspect was said to have taken Darasimi from her mother where she was washing clothes in the compound. She even asked the woman to change Darasimi’s clothes that she wanted to take her out to buy biscuits for her down the street. Another affected father, Mr. Ebenezer Ilesanmi, said:

“My wife was with my son in the compound, washing clothes when our new neighbour approached her.

The woman told my wife to bring our baby, to assist her to hold, so that she could concentrate on the washing. She took the baby and promised to return soon.

“After washing the clothes, my wife became worried because the woman was not yet back. Moreover, it was time for the baby to breastfeed. My wife later went to check the two other kids’ mothers, to know if their own children had returned.

Unfortunately, it was the same thing. It was at that point that my wife called to tell me what was going on. “Immediately, I left what I was doing and rushed home. I saw a crowd in front of our compound; everyone was searching for the children. Since then, we have not seen them.

Since then, my wife has been weeping, asking for the whereabouts of her son. I’m appealing to the police to rescue the kids. My son is just an infant. I don’t know how they will breastfeed him. He is our first child.

I don’t know where or whom to run to. When we broke into the suspect’s apartment in the presence of the policemen, there was only curtain at the door and window.”

The landlord, Mr. Tajudeen Leshi, denied collecting the house rent from the suspect. According to him, the woman paid to his son.

“I was not around when the woman and her husband came to inspect the apartment; after they agreed to move in, they gave my son N30,000, instead of N50,000 for a year. Initially, I refused to collect the money, but my son persuaded me on the phone to collect it from them.

“They promised to balance me N20,000. When I returned, I told my son to call the woman to get her details. When she approached me, she said they were from Calabar. I spoke the language to her, but she didn’t understand it.

She claimed that she was born in Lagos State and didn’t understand her language. The only mistake I made was that, because they were rushing to move in, I didn’t get their details. It was when she abducted the kids it occurred to me that I had made a grave mistake.

I also blamed the kids’ parents; how can they hand their children to someone they had just known for only four days?”

When the distraught parents stormed the Mowe Police Station, the Divisional Police Officer in charge of the station, told them investigation would commence immediately.