Woman allegedly sacked in Lagos for giving birth to triplets 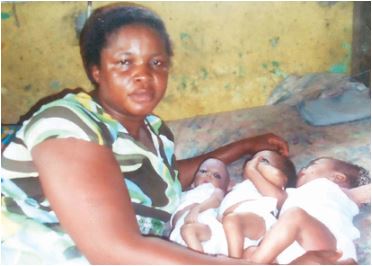 It was mixed blessings for Precious Amadi, when she delivered a set of triplets, two boys and a girl on the 27th of December, 2017. On the other hand, she became worried because she lost her job because of the kids.

According to reports, the 38-year-old got her appointment terminated after she gave birth to the triplets.

“Ï am a trained teacher. I have my National Certificate of Education, NCE, qualification. I have been teaching for over 13 years and I was a teacher in that school for almost eight years.

“After I gave birth at the General Hospital at Ajeromi Local Government, Lagos, I was given only four weeks maternity leave by my employer. But it was not enough. I couldn’t resume work after four weeks because it was not an easy period for me at all, particularly because I gave birth through Caesarean Section” Precious told Vangard.

After the four weeks elapsed, Precious who said she was earning N18, 000 per month, decided to go back to her employer to seek permission for more time with her babies.

“I didn’t expect to get the normal three months, but I needed more time at home until my babies were stronger. To my surprise, when I went back to the school, I was told my services were no longer needed. It was then I discovered I had already been replaced and my salary stopped.”

Precious who already has three children with her husband Ifeanyi Amadi, before the triplets were born, is currently jobless and going through tough times with her husband, a jewel merchant, who had lost his shop in Idumota, Lagos, to developers.

“My husband’s business has been stalled because the shop where he was trading was taken over by developers. He lost his goods in the process and is only still hoping for a miracle. We have spent all we have in taking care of the children. Right now, we don’t know what to do. We intend to take care of them as parents but seeing what is around us makes it very difficult. Even to feed is a great challenge most times. We owe so much debt and our rent is more than one year overdue,” Precious said regretfully.