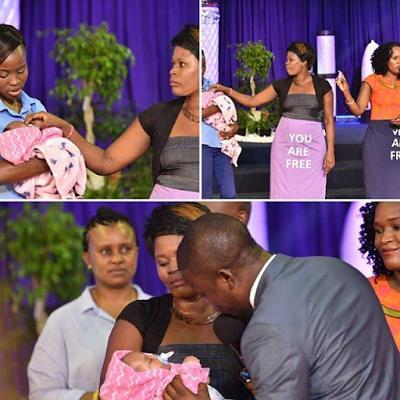 A woman, has testified to how her baby boy was turned to a girl in Church.

According to the woman, who shared her testimony at the ongoing Sunday service at the Enlightened Christian Gathering Church, Pretoria, headed by wealthy Malawian pastor, Prophet Shepherd Bushiri, she had always wanted a baby girl and couldn’t be more happier.

She revealed that she was disappointed when she went to the doctor for routine scan and was told she was carrying a boy. Her joy knew no bound when with the help of an anointing oil given to her y her pastor, her baby boy became a baby girl

“My baby girl is a miracle baby… A lady from Botswana steps forward to testify on behalf of her sister, who was seven months pregnant and was believing God for a baby girl. She narrates that the doctor scanned and told her that she is carrying a baby boy. Her sister was disappointed because she already has two sons and was hoping for a baby girl. I came as an International Visitor and Major 1 gave me a gift of the anointing oil.

When I arrived home I gave my sister the anointing oil and in faith my sister applied the anointing oil declaring that the God of Major 1 must change the gender of the unborn baby that she was carrying to change from a baby boy to a baby girl. On the day that she was giving birth the doctors were shocked as they saw a baby’s gender had changed from a male to female. And when her father heard of what had happened, he changed from going to the sangomas and he followed them to pray to the God of Major 1.

Wherever you are something is turning around in the mighty name of Jesus.”