Woman collapses after her husband hit her on her CS scar 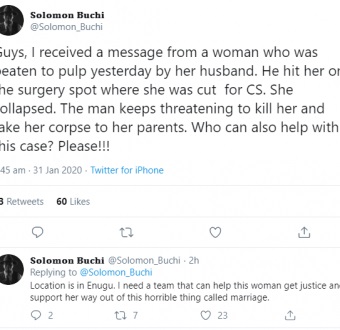 A husband has reportedly been summoned by the Enugu state police after he hit his wife on the spot where she had CS surgery.

According to @Solomon_Buchi, the husband beat the woman “to pulp”, then she “collapsed” when he hit her on her CS surgery scar at their home in Enugu.

After the story was shared on Twitter, users tagged the police and an update was given to reveal that the husband has been summoned by the DPO in charge of the police station in her area.

Read the tweets below.