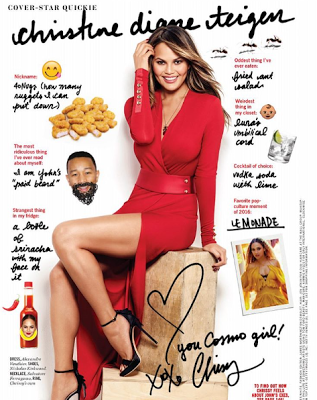 New mom, Chrissy Tiegen, as usual, bared all in a new interview with Cosmopolitan Magazine

The supermodel and wife to RnB singer, John Legend, revealed that she infact, is keeping her daughter, Luna’s umbilical cord in her closet.

On delivering of her baby, she said:

You don’t think about the ripping.’ ‘When you’re holding your baby, you don’t realise they’re sewing you up.’ She added: ‘There’s this thing called the ‘Daddy Stitch’ – they do an extra one for daddy.’

Chrissy and her husband, John Legend, have been married 3-years and welcomed Luna in April, 2016.